Posted on April 13, 2016 by rmgtravelsandfood

I am currently on vacation …

… from reality. Well, a large portion of it, at least. Especially the bits that dominate the evening news bulletins these days: tax avoidance and corruption in high places, the overwhelming refugee crises, the litany of terrorist attacks, bleaching of the Great Barrier Reef’s coral communities, drug-fuelled violence on the streets of my city, the US Presidential Primaries, etc, ad nauseam. Where’s the mute button on this thing?

Until further notice, the less I know about what is happening in my own country, and elsewhere around the globe, the less likely I am to be afflicted by profound pessimism about the future of our planet, and the more able I feel to do things that benefit my family and my immediate community of friends, neighbours and colleagues.

My choice of holiday destination would surprise people who know me reasonably well, or lead them to conclude that my medications need to be reviewed!? After all, from my mid-20s to my mid-40s, I was a vigorous and, sometimes, pioneering optimist, working in various ways to improve the well-being of the environment, the communities in which I lived and socially or economically disadvantaged people. However, I have steadily lost hope on all these fronts, despite an improved level of personal happiness.

Happily, the corner of reality to which I have retreated still includes travel. Which is preceded by Planning to Travel, our favourite parlour game, and Spending on Travel, which is not quite so much fun (but let’s not talk about that!)

Our next international journey will be from mid-August to mid-September this year, a trip we began to plan towards the end of July 2015. That might sound a bit extreme but, if we hadn’t made some early decisions, we wouldn’t have secured a cabin-with-verandah for the 7-night canal-and-river cruise we will be taking from Amsterdam to Basel in the last week of August.

Closer to the time, I will preview this trip in more detail. Now, let me tell you about the result of our latest whirl of the Planning to Travel wheel.

Much as we love travelling in Europe – this year’s visit will be our sixth in eight years – we had begun to think that it was about time we made a journey to North America. For Maggie, that would have to include some time in the Canadian Rockies: think Banff, Lake Louise. So, we grabbed some brochures and trawled the internet, aiming to find a way to fulfil this ambition and then link it with other destinations of interest.

We’ re not skiers, nor are we hikers, but we are big on scenery, learning as much as possible about the places we visit, and the comfort, security and fringe benefits of a guided tour. So, we were tempted by an Insight Vacations tour that commenced in Vancouver, spent more than a week in the mountains and then gave us the option of a train journey to Toronto, including a visit to Niagara Falls. From there we could go to the icon-rich cities of New York and Washington, before flying home, perhaps stopping over in Hawaii.

We slept on that for a while and returned to the ‘to be done’ list for this year’s trip. You know how it goes – hotel bookings, Dubai stopover, currencies, car hire, insurance.

Then, last week, we revisit the concept for our first visit to North America. Maggie was concerned that it might be overly complicated, loaded with too much ‘getting to’ and ‘getting from’. So, I suggested we look at what lies to the south of Vancouver, including Oregon and Northern California. We have various reasons to want to visit Portland, Oregon and there are many attractions in and around San Francisco which appeal to us.

So, we have a plan: a version of the Insight tour which returns us to Vancouver; a train ride to Portland; ditto to San Francisco; and some day trips to such places as Napa Valley, redwood forests and Yosemite. Preferred dates? Sometime that will present us with the vibrant colours of the northern fall.

California Dreaming indeed, 50 years since I first heard the song of that name by the Mamas and Papas! 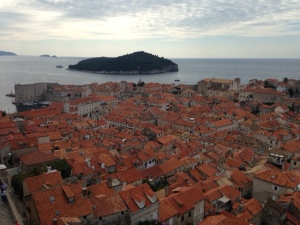 Maggie and I are both in our mid-60s and live in Melbourne, Australia. This blog is devoted to our shared passions for travel and fine dining at home. As cooks, we are skilful and adventurous within a framework of mainly traditional ingredients and techniques, and we aim to prepare nutritious food that looks good and tastes delicious. Our evolving repertoire is influenced by both our travels and Melbourne's vibrant food culture. While we are young enough, our priority travel destinations are overseas, although we do spend a few long weekends each year exploring parts of south-eastern Australia. As travellers, we are most comfortable with a combination of organised and independent touring. Our first overseas journey together was to Italy in the northern autumn of 2008. We later travelled in France (2009), Spain (2011), Singapore and Cambodia (2012/13). All trips from 2014 to 2016 are documented in this blog. When time allows, we will publish posts about our journeys - eight and counting - in 2017, 2018 and 2019
View all posts by rmgtravelsandfood →
This entry was posted in Travel and tagged Banff, Portland Oregon, Rocky Mountains, San Francisco, Vancouver. Bookmark the permalink.