Posted on March 16, 2016 by rmgtravelsandfood

This is one of those posts which is written more ‘for the record’ than for the world of blog readers, but some of you might find elements of the narrative to be of value or interest.

It is now a little over one year since the deaths of, firstly, my elderly mother and, s short time later, my younger sister Fi. A couple of weeks after Fi’s funeral was held in Western Australia, I conducted a memorial service for her in Melbourne. It was a full-throated celebration of her life, warts and all, concluding with a mass karaoke rendition of an Australian rock anthem, Most people I know think that I’m crazy.

One of my dearest memories from that day of mixed emotions is the fact that eleven of Fi’s sixteen cousins attended the service, including three whom I had rarely seen during my childhood, let alone my adult life. As was the case for Fi. Yes, they were, in part, representing their father, one of my late mother’s two brothers, who had a prior commitment that day. Still, I felt that it was a significant act of respect, one that merited more than just “thanks for coming”.

In the following months, I had some contact by phone and email with one of the cousins – all three are women – and then we were invited to a family gathering to celebrate my uncle’s birthday. We went along with some homemade canapes, got to know the cousins and their children a little and had a pleasant time. We went to a similar event a couple of months later, but we were soon busy preparing for and enjoying our 2015 trip to Europe, then getting our life back in order back home and soon it was the festive season.

When we were invited to catch up with my cousins et al on Christmas Day, we had to decline; we had special plans of our own. However, I vowed that we would see them early in the new year, that this would happen in our home and that Maggie and I would provide the food.

Regular readers of my blog might recall that we had some significant interruptions to our routine in January and February. Eventually, we were clear of those and able to set a date, on the basis that it would be a gathering of just the members of our generation. Extended family events have their place but, on this occasion, I wanted to hang out with my cousins and get to know them a lot better; and vice versa.

And so it was that, last Monday – a public holiday in our city – Maggie and I served lunch to three cousins and two husbands. The weather was fine and mild – a blessed relief after more than a week of heat and humidity – and we were all in good spirits. We kept the menu relatively simple: two chickens, flavoured with a herb-rich stuffing and roasted in the Weber; four salads – fennel and orange, ‘beetroot Waldorf’, pea and lettuce and warm potatoes tossed with olive oil and herbs. And to follow: pears that had been poached in a spicy red wine syrup.

There was lots of conversation: sometimes earnest, other times light; sometimes personal, other times about the wider world. Three hours were spent very comfortably and, for the four cousins in the room, it was an unexpected development from the brief contact we had early last year. A good thing to do, done well.

Now, briefly back to the food. For those who are interested, recipes for the menu elements can be found via the Index of recipes. To prepare our herb stuffing for two chickens, we needed to use two egg yolks. We don’t use the egg whites – the stuffing cooks too firm and we prefer it to be loosely packed. So, we made a batch of meringues, which we have shared with a colleague who is doing it tough at Maggie’s workplace.

Here are the chickens, just after coming out of the Weber, and the meringues, just before they went into our indoor oven. No, you’re not seeing double – two egg whites = eight meringues! 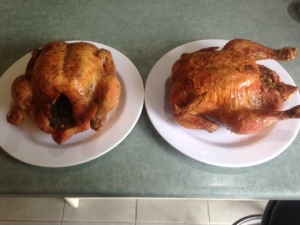 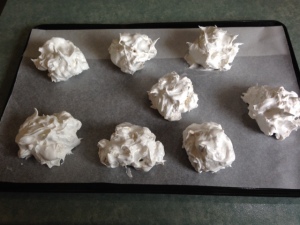 Maggie and I are both in our mid-60s and live in Melbourne, Australia. This blog is devoted to our shared passions for travel and fine dining at home. As cooks, we are skilful and adventurous within a framework of mainly traditional ingredients and techniques, and we aim to prepare nutritious food that looks good and tastes delicious. Our evolving repertoire is influenced by both our travels and Melbourne's vibrant food culture. While we are young enough, our priority travel destinations are overseas, although we do spend a few long weekends each year exploring parts of south-eastern Australia. As travellers, we are most comfortable with a combination of organised and independent touring. Our first overseas journey together was to Italy in the northern autumn of 2008. We later travelled in France (2009), Spain (2011), Singapore and Cambodia (2012/13). All trips from 2014 to 2016 are documented in this blog. When time allows, we will publish posts about our journeys - eight and counting - in 2017, 2018 and 2019
View all posts by rmgtravelsandfood →
This entry was posted in Cooking and tagged meringues, poached pears, roast chicken, salads. Bookmark the permalink.