Posted on January 4, 2016 by rmgtravelsandfood

In the lead-up to Christmas, my father requested a meal of crayfish, and my son, Julian and his wife, Sara simply said they would like a variety of seafood. That suited Maggie and me just fine – we like many types of seafood.

For practical reasons, we served a festive lunch to my father two days before Christmas Day. We began simply, sharing a dozen oysters grown in Coffin Bay, South Australia. They had been shucked that morning and the quality was outstanding. Then came the crayfish, plated beautifully by Maggie in all its red-and-white glory.

The crayfish was accompanied by a freshly-made cocktail sauce, a creamy potato-and-herb salad, and a lightly dressed salad of baby spinach leaves and thick slices of our home-grown small tomatoes. For wine, we shared a bottle of Jim Barry’s ever-reliable Watervale (Clare Valley) Riesling. And, for dessert, we enjoyed some of this season’s remarkable raspberry crop with a spoonful of ice cream.

Later that afternoon, we strolled up the street to the home of our friends Janet & Gary, to share some nibbles and a glass or three of wine. We contributed a dip, made from Goulburn River smoked trout, herbs and a creamy dressing, with fresh carrot & celery crudites. This dip is very tasty but also quite rich, so there was plenty left to snack on over the next few days.

Next morning, it was time to do the final shopping and some of the preparation for the Christmas Day meal we would share with Julian, Sara and Iris. We bought another dozen oysters, a tail-end fillet of sashimi-grade Atlantic salmon and a bag of local mussels.

On Christmas morning, the family trio arrived by 10am. Presents were opened, including a plastic set of gardening equipment for Iris – wheelbarrow, watering can, forks and spades and a lawnmower with a starter cord that would generate a whirring sound when pulled. They are very active in their home garden, so Iris was one happy grand-daughter.

Once Iris had watered some of our pots with her watering can, it was time to start grazing. We had sweets and salad fruits, freshly-roasted chicken and ham for Iris; the rest of us began with the oysters. This dozen was from Tasmania and less fresh by a day, so they didn’t wow us like the ones from Coffin Bay.

No matter. The next small plate packed plenty of wow – salmon carpaccio with a tomato, herb and lime salsa. We have made this many times before but this was our best-ever rendition; Julian and Sara both had second serves.

Next came a plater of chilli mussels, which we had prepared the previous evening. Gently heated to little more than room temperature, they were full of flavour. And, like the salmon plates, full of Christmas colours. 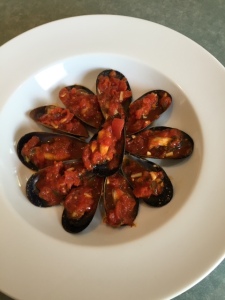 We then put out some pieces of the chicken, slices of ham, a dressed salad of baby spinach leaves and toasted walnut, and some baby beetroot that I had boiled, peeled and dressed. Soon after we had rounded out our lunch with some fresh berries, it was time for Iris to go home; she had worn herself out gardening and paddling in the little pool we have for her in our yard. We had all enjoyed ourselves thoroughly.

But wait, there’s more! Once we had cleared up and put the dishwasher to work, Maggie suggested we retire to our couch with a glass of the Pewsey Vale riesling we had brought back from the Barossa Valley in June. While I made myself comfortable, she disappeared into our spare bedroom and returned with two wrapped parcels for me to open. This was quite a surprise, as we long ago stopped buying Christmas presents for each other; our seasonal food budget is part of the reason for this!

Inside the wrapping paper, I discovered two wonderful cook books: the updated edition of The Cook’s Companion, by Stephanie Alexander; and Mastering the Art of French Cooking, the famous book co-authored by Julia Childs and two French friends of hers. The former book is our first point of reference for what we do in our kitchen. The latter pushes many of my buttons: French food; the book and subsequent movie, Julie and Julia; Meryl Streep, my favourite actress, playing the part of Julia; our love affair with Paris …

This special day was not done yet. Maggie had quietly secreted a second crayfish in the house and proposed that she prepare it in the manner of ‘lobster thermidor’. I’m not actually a big fan of crayfish. I don’t dislike it but I don’t appreciate the way that Maggie, my father and many others do, so its luxury-goods price tag is a mystery to my palate. However, the dish that Maggie served up was quite delicious and one I would happily eat again … when we next win the lottery! 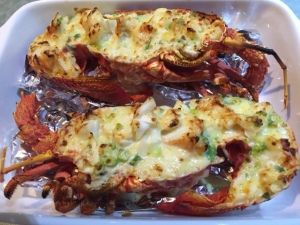 Unsurprisingly, our menu was a little simpler on the following day. But we did treat our palates to some tooth-picked snacks of pieces of fresh buffalo mozzarella sandwiched between homegrown basil leaves and cherry tomatoes.

Recipes for these dishes will appear in a subsequent post. All of the fresh seafood was purchased from Eat Fish.

Maggie and I are both in our mid-60s and live in Melbourne, Australia. This blog is devoted to our shared passions for travel and fine dining at home. As cooks, we are skilful and adventurous within a framework of mainly traditional ingredients and techniques, and we aim to prepare nutritious food that looks good and tastes delicious. Our evolving repertoire is influenced by both our travels and Melbourne's vibrant food culture. While we are young enough, our priority travel destinations are overseas, although we do spend a few long weekends each year exploring parts of south-eastern Australia. As travellers, we are most comfortable with a combination of organised and independent touring. Our first overseas journey together was to Italy in the northern autumn of 2008. We later travelled in France (2009), Spain (2011), Singapore and Cambodia (2012/13). All trips from 2014 to 2016 are documented in this blog. When time allows, we will publish posts about our journeys - eight and counting - in 2017, 2018 and 2019
View all posts by rmgtravelsandfood →
This entry was posted in Cooking and tagged buffalo mozzarella, chilli mussels, crayfish, oysters, salmon carpaccio, smoked trout, thermidor. Bookmark the permalink.