Posted on November 30, 2015 by rmgtravelsandfood

After our short ferry ride from Korčula to Orebic, our coach took us back down the Pelješac peninsula to the town of Ston. For many centuries, Ston was part of the republic of Dalmatia, whose leaders managed to retain a remarkable independence from the forces of both Venice and the Ottoman empire.

Today, Ston is best known for the extensive remains of the wall which was erected in the 14th and 15th centuries to protect the precious salt pans in the area. (Salt had been more precious than gold since at least Roman times when soldiers were paid in salt, hence the word ‘salary’.) The wall is the second largest in the world after the Great Wall of China; restorations are ongoing and it is possible to walk on some sections. 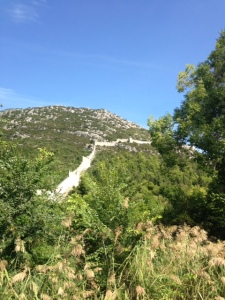 From Ston, it was only a short drive to Dubrovnik, where we would spend the last three nights of our tour. We were taken straight to the main drop-off point just outside the main gate of the old city. There were many hundreds of tourists there, along with all manner of offers for escorted walks, boat rides, etc, and we heard that there were FIVE cruise ships in port!

Happily, our group was soon in the hands of a local guide, Ida, who had grown up in the old town and had been a child of school age on the day in October 1991 when the city suffered its first artillery attack from the Serbian-lead Yugoslav army and navy. (The shelling continued for more than 12 months before a truce was negotiated, in relation to Dubrovnik, although the wider hostilities continued until 1995.)

Ida covered the facts of the events of 1991-92 and then took us through the gate and into the town itself. Despite the crowds, it is was not difficult to appreciate the attractions of the Dubrovnik, with stone buildings lining both sides of the main street and the many interesting smaller streets and alleyways leading from it.

We learnt from Ida that the population living within the walls of the old town is dwindling and is mostly older people. The legitimate heritage restrictions make it both difficult and expensive to modernise residential buildings to suit contemporary family life. For the same reason, work to repair the damage of two decades ago can be slow and complicated; we saw ample evidence of shrapnel damage to external walls of some buildings.

When our guided walk finished, it was time for lunch. It seemed that most of the narrow streets of the town were occupied by eating establishments and most of them were offering food with a pronounced Adriatic leaning, to be eaten al fresco. Soon enough, we were enjoying a lunch of mussels for Maggie, a seafood risotto for me, a simple salad and a glass of white wine.

These next photos provide three markedly different views of Dubrovnik. The first is of a sign, erected just outside the main gate, indicates the buildings and streets which were damaged by artillery shells. (There were more than 90 deaths in the town, mostly Croatian soldiers.)

The second is of a work hanging in the Franciscan monastery, showing the town as it would have looked in medieval times, including the hill from which Dubrovnik was shelled in 1991. The monastery is also home to Europe’s oldest apothecary/pharmacy, dating from early in the 14th Century. (I am descended from apothecaries, so I was easily persuaded to pay what turned out to be an unreasonably large sum to, enter the monastery!)

And the third photo is one I took from our tour coach, driving along the highway just above the old town. 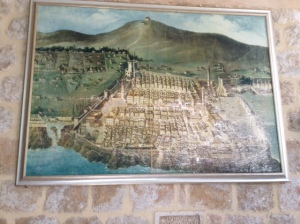 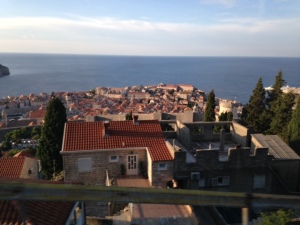 Lunch, the monastery visit, a little souvenir-shopping – six grandchildren and counting – and some gelato – you CANNOT go broke selling ice-cream in Croatia – and then it was time to check into our hotel in one of the modern areas of Dubrovnik, relax and freshen up. For our day of touring was not over – we were booked on a sunset cruise.

The sunset cruise was very enjoyable, a highlight of the optional tour add-ons. It was just members of our group on a compact and comfortable boat, operated by a family who were the perfect hosts. They took us from Dubrovnik’s new port, into the sea to watch the sunset, and then to a quiet bay where they served a fresh fish dinner and some of their own cheap and cheerful white wine. The cruise finished at dusk, in the glow of the lights of the old port. 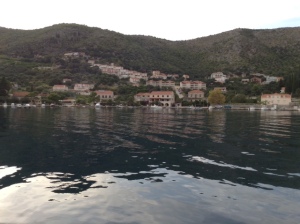 The next morning, we set off straight after breakfast for a day trip to Kotor, in Montenegro, an option that had been recommended by friends who had been on this tour a couple of years ago. I will cover this outing in my next post.

On our final day in Dubrovnik, Maggie and I chose to stay behind, while most of the group went on another optional day trip. The forecast was for a fine, mild day and I had decided to do the walk around the city walls (as previously posted).

After I had finished the walk, I met Maggie and we made our way to Bota, a sushi and oyster bar; Maggie was quite keen to try some oysters from the farms we had seen a few days previously. The restaurant’s commitment to the local oysters included a full page in the menu, describing the types of oyster and the farming process. We enjoyed some tempura style and some au naturel; they were excellent. 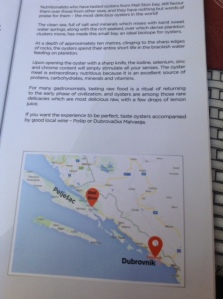 After lunch, we spent another pleasant hour in the old town and then used the efficient local bus service to return to our hotel. We were scheduled to join the rest of the group later in the day for a farewell dinner, but Maggie was feeling a little unwell and, to be honest, we were both feeling ‘tour-lagged’. So, we rounded off our visit to Dubrovnik with a quiet dinner at the hotel, enjoying some fine food – beef carpaccio for Maggie, baby calamari for me – Croatian wines by the glass, and the views from the hotel balcony. 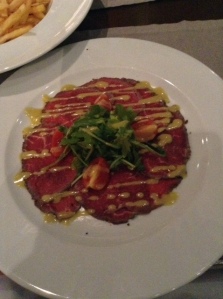 Maggie and I are both in our mid-60s and live in Melbourne, Australia. This blog is devoted to our shared passions for travel and fine dining at home. As cooks, we are skilful and adventurous within a framework of mainly traditional ingredients and techniques, and we aim to prepare nutritious food that looks good and tastes delicious. Our evolving repertoire is influenced by both our travels and Melbourne's vibrant food culture. While we are young enough, our priority travel destinations are overseas, although we do spend a few long weekends each year exploring parts of south-eastern Australia. As travellers, we are most comfortable with a combination of organised and independent touring. Our first overseas journey together was to Italy in the northern autumn of 2008. We later travelled in France (2009), Spain (2011), Singapore and Cambodia (2012/13). All trips from 2014 to 2016 are documented in this blog. When time allows, we will publish posts about our journeys - eight and counting - in 2017, 2018 and 2019
View all posts by rmgtravelsandfood →
This entry was posted in Travel and tagged Croatia, Dubrovnik, Insight Vacations, Ston. Bookmark the permalink.