Posted on November 17, 2015 by rmgtravelsandfood

After our night in Plitvice, we headed south, descending out of the large cloud mass that had dominated the previous day’s weather and onwards to the Dalmatian coast. By late morning, we had arrived at Trogir, a delightful town that is listed by UNESCO as a World Heritage site.

We were left to our own devices for a couple of hours and, in the idyllic weather, we explored some of the narrow streets, and the seaside promenade that led to Kamerlengo Castle, built by the Venetians in the 15th Century. Soon enough, it was time for lunch. We continued our exploration of Adriatic seafood – fried calamari for Maggie and pasta and prawns for me. 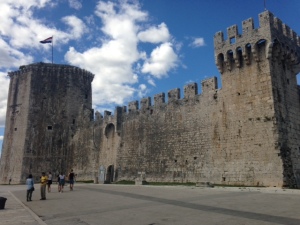 After lunch, Robert drove us to Split, now a sizeable industrial and port city, but famed for the remains of the ‘retirement’ palace of the Roman emperor Diocletian, built at the beginning of the 4th Century AD. A local expert guide took us on a detailed tour of the conserved parts of the building, including much that has been incorporated into subsequent structures. 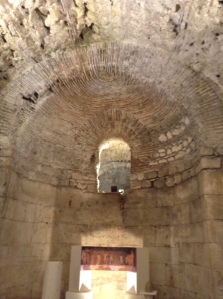 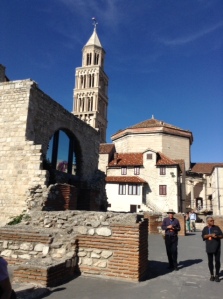 We then had free time to explore other parts of the old city, much of which reflected the lengthy period of Venetian rule. We were quite taken with Split, and would have been happy to spend a second night there. 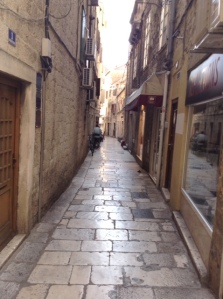 Maggie and I are both in our mid-60s and live in Melbourne, Australia. This blog is devoted to our shared passions for travel and fine dining at home. As cooks, we are skilful and adventurous within a framework of mainly traditional ingredients and techniques, and we aim to prepare nutritious food that looks good and tastes delicious. Our evolving repertoire is influenced by both our travels and Melbourne's vibrant food culture. While we are young enough, our priority travel destinations are overseas, although we do spend a few long weekends each year exploring parts of south-eastern Australia. As travellers, we are most comfortable with a combination of organised and independent touring. Our first overseas journey together was to Italy in the northern autumn of 2008. We later travelled in France (2009), Spain (2011), Singapore and Cambodia (2012/13). All trips from 2014 to 2016 are documented in this blog. When time allows, we will publish posts about our journeys - eight and counting - in 2017, 2018 and 2019
View all posts by rmgtravelsandfood →
This entry was posted in Travel and tagged Croatia, Insight Vacations, Split, Trogir. Bookmark the permalink.