Posted on July 28, 2015 by rmgtravelsandfood

As a child, the only edible mushrooms I knew about came buttered and stewed, in a tin, and were eaten as a side dish with a grilled piece of steak. Sad but true!

Even as an adult, cooking mostly vegetarian food in my 20s and 30s, I rarely bought any fresh mushrooms, and the few that I did buy were of the slightly bland, white-skinned variety that was mass-produced in contrived environments.

Eventually, in my mid-40s, I began to take mushrooms more seriously. Although I am hardly a connoisseur, I at least look for opportunities to avail myself of their savoury qualities, either on their own or as a significant ingredient in a complex dish.

The original recipe for this soup came via Maggie’s daughter, a self-confessed soup-aholic. I have enjoyed it from the very first time I made it and I have barely altered the recipe over more than a decade of preparing a pot of it several times each year.

I made a batch last week, expecting to serve some at home and capture it on my i-Phone before I ate it. However, it was put aside to be taken to Healesville and shared with Julian, Sara and Iris for lunch. Everyone enjoyed it, although some of Iris’ serve didn’t quite make it to her mouth; she is determinedly independent but, at 18 months, is still a few weeks short of mastering her use of a spoon! (And that’s another photo I wish I had taken.)

And, in a first for me, Julian commented on the ‘umami’ element of the soup’s flavour. I have only recently heard of this fifth flavour being added to the long-recognised salt, sweet, bitter and sour. So, I learnt something from my son, a not-infrequent event, as I age and he hits his straps. 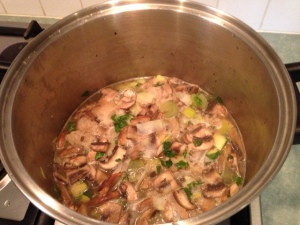 Maggie and I are both in our mid-60s and live in Melbourne, Australia. This blog is devoted to our shared passions for travel and fine dining at home. As cooks, we are skilful and adventurous within a framework of mainly traditional ingredients and techniques, and we aim to prepare nutritious food that looks good and tastes delicious. Our evolving repertoire is influenced by both our travels and Melbourne's vibrant food culture. While we are young enough, our priority travel destinations are overseas, although we do spend a few long weekends each year exploring parts of south-eastern Australia. As travellers, we are most comfortable with a combination of organised and independent touring. Our first overseas journey together was to Italy in the northern autumn of 2008. We later travelled in France (2009), Spain (2011), Singapore and Cambodia (2012/13). All trips from 2014 to 2016 are documented in this blog. When time allows, we will publish posts about our journeys - eight and counting - in 2017, 2018 and 2019
View all posts by rmgtravelsandfood →
This entry was posted in Cooking and tagged Mushroom soup, recipe for mushroom and leek soup, Soups. Bookmark the permalink.