Corned beef with a citrus twist and a hot potato

Posted on April 16, 2015 by rmgtravelsandfood

Corned beef. Nice in a sandwich. Very appealing after a hard day’s work on a Kimberley cattle station, according to some Aboriginal friends of long ago. But, not exactly gourmet food, is it? Well actually, it IS served as a dinner party dish in our home. After some contextual filling, I will tell you how it’s done.

Maggie and I have very different memories of corned beef. An only child, she grew up with her parents and her maternal grandparents. Maggie’s grandmother was an excellent cook and one of her strengths was using economical ingredients to produce delicious food. Corned beef was one of those.

In my childhood home, corned beef was never served as a main meal; in fact, I believe that my mother never cooked it at all. From time to time, she would buy some slices of cooked corned beef from her butcher and make some sandwiches with it. And that was the sum total of my corned beef data pool.

Then, in my early 20s, a professor of Irish descent at my university, encouraged me to give it a try. I was soon hooked and it became one of my go-to-dishes during my undergraduate years of trying to eat well on a limited budget. (I served the beef with boiled potatoes and a gravy made by thickening the cooking liquid, including its pieces of carrot and onion, with some corn flour. Think Irish pub grub.)

However, once I entered the workforce, I could afford to be a bit of a food snob; I discarded corned beef in favour of slow-cooked gourmet braises – think osso bucco – and handsome roast dinners. And then I married a vegetarian.

Two decades later, Maggie brought the recipes of Beverley Sutherland-Smith into my life; Beverley has been one of the most revered cookery writers in our home city of Melbourne. In time, flicking through one of her books, we came across a recipe for corned beef, in which the boiled meat was finished off in an oven, basted with a citrus glaze. We liked the result very much and, although we have made various modifications, the core of the recipe came from Beverley.

Now, corned beef is often served with a hot mustard sauce, something with which Maggie was familiar. But my palate memory of side dishes was potato-dominant. So, we compromised and developed a version of potatoes dauphinoise infused with hot mustard and, more recently, a hint of grated garlic. To complete the plating, we add a green vegetable, eg beans. If you have access to some sweet carrots, they would go well too.

So, a very tasty dinner dish, but we always save some of the corned beef to go in a lunchtime sandwich, along with Maggie’s green tomato pickle. 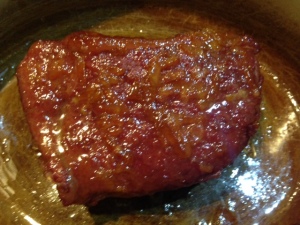 The basic method for potatoes dauphinoise is readily accessible in cyber space, so I won’t formalise our version. To reduce the cooking time, we cut the peeled potatoes into slices about 4-5mm thick, tip them into a large saucepan of salted, boiling water, bring the water back to the boil and cook the potatoes for 1 minute before draining them thoroughly. On this occasion, we used about 700g of Dutch Cream spuds; Nicolas and other waxy potatoes work well too.

The cream mixture comprises 150ml of light cooking cream, 100ml of light sour cream, two to three cloves of garlic grated (or crushed), 3-4 tsp of Hot English Mustard, 1-1½ tsp of salt and a few grinds of black pepper. (If you whip the mustard with the sour cream before you add the other ingredients, it will be easier to achieve a smooth and well mixed cream.)

As you can see, the cream mixture is poured in after the slices of potato have been placed in the baking dish. We then cover the dish with foil and place it on the middle shelf of an oven heated to about 160C. After 40-45 minutes, we remove the foil and bake the dish on a lower shelf – ie below the glazed corned beef – for a further 25 minutes or so until it is golden brown. 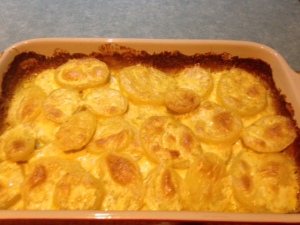 Maggie and I are both in our mid-60s and live in Melbourne, Australia. This blog is devoted to our shared passions for travel and fine dining at home. As cooks, we are skilful and adventurous within a framework of mainly traditional ingredients and techniques, and we aim to prepare nutritious food that looks good and tastes delicious. Our evolving repertoire is influenced by both our travels and Melbourne's vibrant food culture. While we are young enough, our priority travel destinations are overseas, although we do spend a few long weekends each year exploring parts of south-eastern Australia. As travellers, we are most comfortable with a combination of organised and independent touring. Our first overseas journey together was to Italy in the northern autumn of 2008. We later travelled in France (2009), Spain (2011), Singapore and Cambodia (2012/13). All trips from 2014 to 2016 are documented in this blog. When time allows, we will publish posts about our journeys - eight and counting - in 2017, 2018 and 2019
View all posts by rmgtravelsandfood →
This entry was posted in Cooking and tagged corned beef, potatoes dauphinoise. Bookmark the permalink.